5 Emojis of Religious Places That You Should Know About 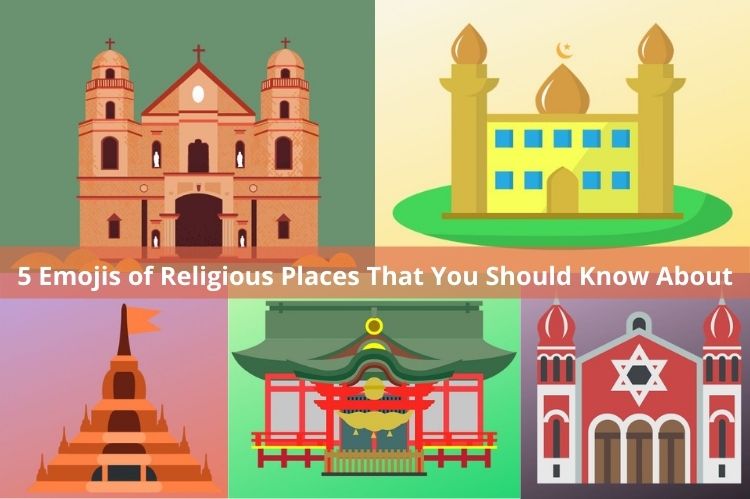 We must acknowledge that not everyone’s the same as us, and each person has a different look, attitude, and even beliefs. Religion can mold us as humans, and this aspect of someone’s life should be respected and honored. It is interesting to know that there are so many different religions worldwide, and thanks to some emojis that depict religious places, we get to explore them online.

Undoubtedly, other emojis like the buildings emojis, tourist spots emojis, and the houses emoji are fun to look at and use. Still, it is also interesting to appreciate some religious temples worldwide. Please continue reading to find out about some of them!

A church is a building used for Christian religious activities, typically a place of worship. The word church comes from the Greek word κυριακή (kuriakē), which means “Lord’s House.” Christians believe in the Bible as the authoritative source of truth about God and his will for humanity. Since the church is significant worldwide, it deserves to become part of the emoji list.

A mosque is a place of worship for Muslims, typically modeled after the style of mosques found in Saudi Arabia and across the Middle East. They allow worshippers to engage in prayer and other rituals in a comfortable, serene environment free from distractions. Many mosques also serve as community centers, providing access to educational resources for curious visitors and hosting special events like weddings or religious ceremonies.

With the rise of emoji-based messaging and social media, the mosque emoji has become increasingly popular over the past few years. Used in conjunction with phrases like “praying for” or “an answer from Allah,” this simple image offers a fun, visual way to show support or express religious devotion without resorting to words alone. So whether you are using your phone on Friday morning prayers or scrolling through Instagram at midnight, be sure to add a bit of sparkle and spirituality with your next mosque emoji!

A Hindu temple, also known as a mandir, is a place of worship for followers of the Hindu religion. These sacred temples often feature intricately carved columns and deities symbolizing various aspects of Hinduism. They are designed according to strict guidelines in ancient texts.

The Hindu temple emoji rose to popularity on social media and messaging apps like WhatsApp and Facebook. This emoji can express reverence for one’s spiritual beliefs or respect for others’ religious views. For example, you might use this emoji when congratulating someone on a religious holiday or sending positive wishes at the start of a new year according to the lunar calendar. Whether you are connecting with friends online or simply expressing gratitude toward your Gods, the Hindu temple emoji is a great way to share your faith with the world around you.

A synagogue is a place of worship for followers of Judaism. Traditionally, Synagogues have been very similar to churches, with high spires and stained glass windows. However, modern synagogues are starting to take on more unique forms and styles for their communities.

Anyone can use the Synagogue emoji during messaging conversations or on social media platforms to express faith or communicate with others about important community events and services. Whether you want to wish someone a happy Sabbath or show support for local Jewish groups and causes, the synagogue emoji is the perfect way to do it! So the next time you want to express your faith while keeping things lighthearted, do not forget to add this little icon.

A Shinto shrine is where people can worship the kami or Shinto deities. Shrines are located at sacred natural sites, such as mountaintops, waterfalls, or hot springs. They also can be in urban areas, and shrines also serve as landmarks. People visit shrines to pray for good health or a successful harvest. They may also leave offerings of food or other items for the kami.

We must know that it is also essential to acknowledge and respect different religions. When we ultimately embrace our differences from other people, it will promote peace and unity. These religious emojis are adorable to look at, but you must properly use them for respect. If you want to know more meaningful and exciting emojis, visit EmojiGuide.com!

Greatest Actors Of All Time: The List of 45 Popular Actors [Updated 2021]

Eighteen Massive Athletes in the World